As long as I can remember, I have helped narrators craft stories. It is a kind of magic: to embolden their machinery of narrative while equipped with nothing but knowledge, vision, voice. Stories aid survivance; cultures and peoples cultivate narrative technologies, folklores, to function as nourishment, even armament, in times of trouble. If the plot does not grip, characters fail to engage, lessons feel weak or ambiguous — if cultural memory fails to catch — a community could die. The figure standing behind the storyteller is critical to community continuity.

My own stories, all two of them, are not that potent, but perhaps need to be shared. ONE was that my generation’s issei ancestors once migrated from Kumamoto and Yamaguchi to Hawaiʻi, as plantation workers during the Taishō and Shōwa eras. TWO was that our fishermen had supported Japanese fascists, from our region, who rose to the highest reaches of empire during the wartime/postwar eras; and that our small-town business people’s U.S.-born spawn had joined the Army and Hawaiʻi labor movement, becoming a neo-Yankee politician-landowner, altering laws to transform Kanaka Maoli land into property (theirs). My pedagogy as a teacher of creative workers acts upon the deep spiritual repercussions of these stories.

Creative workers, especially narrators, must resist power, to launch their truth in the face of tremendous societal pressures. I like the quiet mollusking, the invisible, generative craft of asking storytellers who they are until they can answer, wielding pearls.

For IndiGen, I am 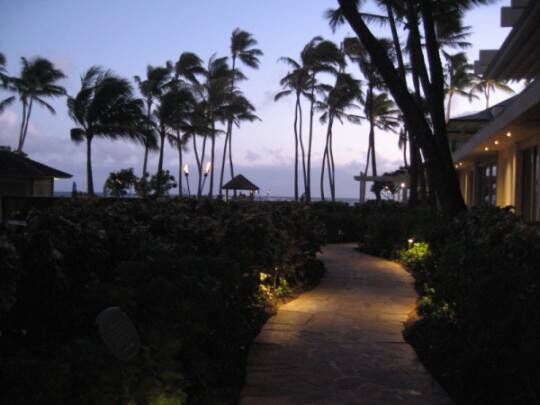 Photo: Kenrick Yoshida, 19 November 2020, Kahala Resort, Honolulu. aiding masterful Pacific Islander and Native Hawaiian media makers, and global museologists, in designing narratives around the worldwide, multidimensional coconut (niu) archive. It is an utterly impossible, utterly necessary undertaking. How do you re-present — well, newly (niu-ly) represent — niu, especially after the ideological damage of Hollywood and the mass tourism industry, which has shrunk it into a trite, empty, flattened icon? See the photo, by Kenrick Yoshida, of niu planted along the main pathway of the Kahala Resort; shorn of their nuts, they are placed right above walking tourists for the shallow “romantic” visual value they add to the hotel property. This contrasts with efforts of Hawaiians on Molokaʻi island, where niu groves were customarily placed away from residences, so that locals could mindfully visit when needing fruit, both avoiding falling coconuts and the unnecessarily wasteful (early) removal of those nuts perpetrated by hotels and tourism companies. Kānaka Maoli growing up on the island, according to one of our documentary interviewees, would learn to “hear” the tree grow, so as to know when nuts were likely to fall.

How do you illustrate this Hawaiian consciousness of niu and environment through media technology? How do you show this fully embodied connection that the peoples of Oceania have enjoyed with the tree, its leaves, its blossoms, its fruit, in every dimension of their lives?

For the short films we are producing, the tools of cinema can bring to life the richness of Rotuman and Maoli stories — legendary and oral-historical, folkloric lessons and inter-generational facts — about the coconut to create a “niu” audiovisual narrative. For what we are calling “Niu 1,” an animated fable based on one variant of the niu origin story, I encouraged Vilsoni Hereniko, the Rotuman writer-director-producer, to move away from the oral-storytelling mode of his island’s culture, towards more cinematic narrative techniques, through my feedback to multiple script drafts. For “Niu 2,” a documentary on the Kānaka historical relationship with the tree co-directed by that Pacific Islander auteur and Noelle Kahanu, a Hawaiian museologist-mediamaker, I am pushing the filmmakers to shake up the documentary form; how can we Indigenize the non-fiction film?