Growing up as a member of a diasporic Fijian community in Vancouver, Canada, was not something I consciously thought about until I encountered ‘Fiji’ inside ethnographic museums in my late teens. It was an interesting – and strange – concept to see Fijian culture displayed and explained in ways that privileged the past and paid little attention to the diversity of the present, let alone the future. Where did those of us who did not fit within the so-called box of ‘traditional culture’ fit into the picture? As a diaspora, and as a first-generation Canadian youth in a diasporic community, where did our lived experience fit into the story? Being represented felt important: without it, how could diasporic Fijian youth define themselves and their cultural heritage?

These initial thoughts eventually led to my work in Fijian studies, with a particular interest in reconnecting diasporic communities with cultural heritage housed in museum collections. However, until now, I have not had the opportunity to come back to my younger self’s fascination with my own urban youth and diasporic Fijian identity. Today, urban youth in Fiji are facing similar experiences to global Fijian youth. The capital city of Suva’s community is as much a diaspora as those found around the world. Suva is an ideal meeting point for culturally diverse Fijians to relocate to, yet it is a relatively foreign idea for most Fijians that Suva represents a diaspora and that they are living in a bubble of many different regions of Fiji coming together to create a microcosm of the country’s inhabitants. Cultural identity and representation adapt and take on new forms of cultural practice when communities form outside of their natal ‘homelands’; the same occurs for those living in Suva and other urban centres in Fiji. Youth in these diasporas celebrate an urban culture that embraces fluidity, inclusivity and acceptance, but at the same time face tensions between tradition, modernity and fitting into the standardised notion of Fijian culture. 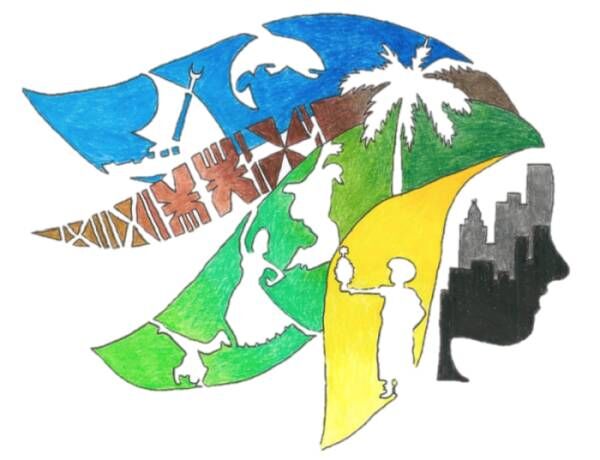 Designed and created by Mereoni Rosi Tora as part of a nationwide competition, the Urban Pathways logo represents Fiji’s urban youth with a lady’s face as an urban centre and her hair depicting pathways to the country’s rich and diverse heritage, arts and cultures.Urban Pathways: Fiji. Youth. Arts. Culture. highlights how the conversation about Indigeneity is rapidly expanding, challenging binaries of traditional and contemporary, rural and urban, land and cash economy, while consequently redefining them at the same time. Courtney Sina Meredith’s concept of ‘Urbanesia’ has helped to shed light on the contemporary social fabric of different cultural communities residing in urban areas. Fiji’s urban youth are now navigating representations of their lived experience of culture on a national level, particularly in the arts and cultural heritage sector. Drawing on the acknowledgement that cultural change empowers Indigenous communities, the project aims to examine the notions of culture from an urban youth perspective and to encourage cultural heritage institutions to broaden the versions of culture presented to their audiences. Documenting what culture and cultural heritage constitutes for Fiji’s youth, particularly those from urban and disadvantaged backgrounds and ethnic minorities such as the Indo-Fijian and Pacific Islander communities, will be driven by the youth themselves and created by using open-space techniques and the interactive method of knowledge sharing and exchange widely known as talanoa.

Since first encountering my own Indigeneity in a museum, I have found that it is not so bad after all to not fit inside the proverbial box. Recently, I revisited a piece written several years ago in which I discussed my conflicted feelings as a young person in a diasporic community and pledged to better involve our diasporic youth in future projects to encourage and empower their lived experience and reality. Today, I see my own reflections in much of the work I am doing now: prioritising ‘Fijianness’ in its many shapes and forms in the hope that one day future diasporic Fijian youth engage with it, feel connected to their own experience of culture and, like me, see themselves in the present and future of Fijian cultural identity.

For more information on Katrina Talei Igglesden’s work, see the Urban Pathways: Fiji. Youth. Arts. Culture. project on the web, on Facebook and on Instagram.