Indigenous curating in a German museum

we look through drawers
Tapakiste 1 and 2
Kleidmatte für Männer from Fais
Kleidmatte from Truk
Kleidmatte für Frauen from Santa Cruz
we look at the Regale
I see your nting
recognize your designs
we are kin
you without a number
like the Lien Rohnkitti without a name
you called my name
and led me to yours, a title
Joumatau
Soumadau
Soumadau en Sapwalap
your nting carved into black painted
breadfruit wood
whitened with lime
dated Mei 1910
Not (Nett)

when you arrived at this museum
you had a fellow padil, now lost
you must have been in mourning for years
did you smell me coming?
ready to pick you up
and dance with you again

Kaselehlie. I open this first blog post with a poem I wrote while serving as the inaugural curatorial research fellow, Oceania (2019–2020), at the MARKK – Museum am Rothenbaum in Hamburg, Germany. “Padil o (the paddle)” in many ways encapsulates my experience as an Indigenous Pacific Islander fellow at the museum, and the mixed emotions I felt while working in an archaic institution that is undergoing significant change in its ongoing effort of “decolonizing and repositioning.” I was hired to participate in this process in several capacities, one of which was to conduct archival and ethnographic research on the collections from the Hamburg South Seas Expedition (HSSE), 1908–1910, by collaborating with the “originating society,” for me being my home island of Pohnpei, Federated States of Micronesia.

Since completing my fellowship, I have reflected on my time at MARKK and thought of how best to write reflexively and critically about a year in which I developed an “ambivalent kinship”1 with the institution. I felt a kinship to the place that has housed dipwsou kesempwal (precious things) from Pohnpei and other valuables from Micronesia for more than a century, about as long as the building that is MARKK, the former Museum für Völkerkunde Hamburg, has been standing. The museum itself was founded in 1879 to house treasures from around the world that were brought here prior to and during Germany’s subsequent colonial expansion. I also felt immensely privileged to have the opportunity to reconnect with my own past in an intimate way that very few Pohnpeians can experience. My ambivalence lies in the museum’s largely colonial and imperial past that facilitated the acquisition (problematic and otherwise) of the material heritage belonging to Pacific Islanders and other colonized peoples. 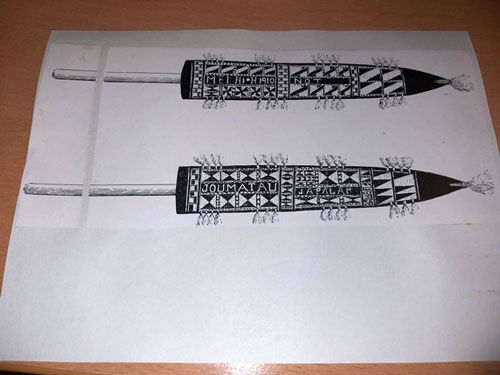 Hamburg South Seas Expedition (1908–1910) illustrated index card of the Tanzpaddel, Inventory No. 452II, Ponape, Karolinien, collected by Dr. Paul Hambruch. Photo: Emelihter Kihleng, 2019.On the first of several visits to MARKK’s storage facility where I delved further into the HSSE collection, my colleague and I looked through the aisles and shelves on either side filled with utilitarian, beautiful, ancestral “objects.” Many of these treasures have not been accounted for and, therefore, have no inventory number. My eyes were always scanning for things that were recognizably Pohnpeian because there were many items that could have been from any number of Pacific Islands. I immediately recognized the padil, having seen the illustrated index card,2 other padil en kepir (dance paddles) in the ethnographer Paul Hambruch’s photographs, and contemporary padil made for the tourist market. I was thrilled to say the least. It had no number, but it had the owner’s title, Joumatau Japalap (Soumadau Sapwalap in today’s Pohnpeian) orthography,3 the month and year, Mei (May) 1910, and finally, a place, Not (or Nett) carved into the breadfruit wood.

Every knowledgeable Pohnpeian who hears the title Soumadau will immediately recall Soumadau en Sokehs, the infamous warrior from Sokehs, who killed the German Governor in 1910 and led the Sokehs Rebellion against the German administration. I am still convinced that this other Soumadau, Soumadau en Sapwalap, who carved this padil in the same year and must have known Soumadau en Sokehs, wanted his padil to be found. I dedicate this blog post 110 years after the rebellion, and the carving of this incredible padil to Soumadau en Sapwalap and his fellow Soumadau. Kalahngan en kupwur koaruhsie.

1 See T. Teaiwa & S. Mallon, “Ambivalent Kinships? Pacific People in New Zealand”, in: J. Liu et al. (eds.) New Zealand Identities: Departures and Destinations, Wellington: Victoria University Press, 2005, pp. 207–229.
2 According to the index card, this padil came as a pair, the second padil now being lost. Given that the padil I discovered belonging to Soumadau en Sapwalap had no inventory number, I hope that perhaps the other padil can still be found...
3 The title in the chiefdom of Nett is Soumadau en Sapwalap.