Through the “native” lens: Configuring “islandness” in the Maldives Islands

The Maldives is famous for its pristine beaches, as a destination for tourists, for travelers from around the world who seek to escape to the insularity afforded by the islands of the archipelago, which average 1-2 km2 in size. The palm-thatched roofs, the tropical landscape, the palm trees swaying in the fresh breeze, and the barefoot experience allow visitors to indulge in a romanticized notion of “islandness”. The associated image of island life, portraying a harmonious relationship between the inhabitants and the natural environment, is found in travel magazines and tourism commercials, with locals being untouched by presence of the foreign influence. Such imagery is a snapshot of an exotic people in their everyday exotic practices in exotic attires, thereby prescribing “islandness” upon a collective group or an individual, albeit from the gaze of the foreigner or outsider.

However, the long history of contact with the outside world facilitated by the porosity of the surrounding waters of the archipelago challenges the very notion of the insularity of the Maldives as a geographically isolated space. As a port for traders, the Maldives has a strategic importance because of its location on the Silk Road and the major marine routes of the Indian Ocean, prompting Arab, British, Chinese, American, and other geopolitical interests that go as far back as the 15th century. The Maldives was a locus for ship-wrecked sailors and a main transit point for travellers passing through these waters. Epidemics such as the current COVID-19 pandemic and the cholera outbreak in 1978, introduced to the islands by a seafaring native returned from an overseas journey; the changes in contemporary attires across decades, influenced by Arabic, Indian, Pakistani and Western dress; the shifting islandscapes changed by harbours, ports, airports and bridges; the ferry system and relationship with the marine environment; the language, people and complexities of the way of life, distinct from island to island, all demonstrate the porosity of borders, reef barriers, channels, and waters in these seemingly absolute spaces that appear contained and constrained by its geo-spatial features. 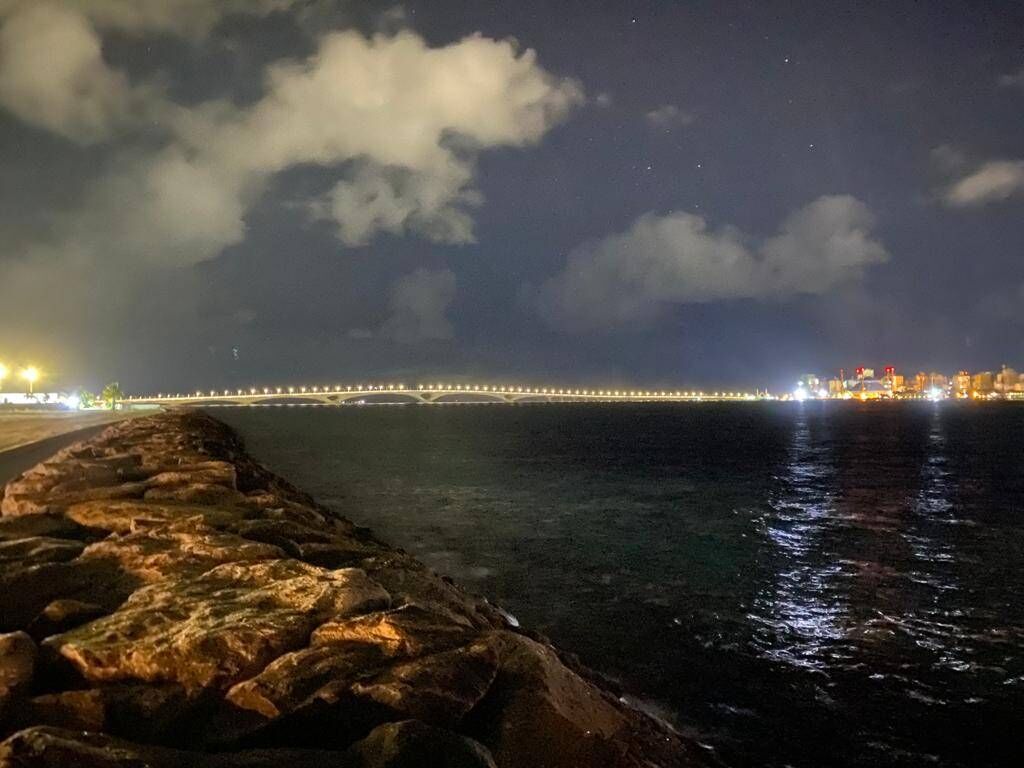 Bridge and the floating lights of Male' City from Velaanaa International Airport. Photo: Thoiba Saeedh, 2021.My current PhD research is interested in exploring the concept of islandness as experienced through the native lens. What does it mean to be an island dweller living in the supposed insular space of an island? What does it mean when islands in small-island archipelagos “graduate” from island status to city status? How is the city island positioned differently to the “island” island? How are remote island dwellers shaped by the physical landscape, and influenced by external forces that connect with the wider world through radios, seafaring natives, foreign visitors and, in contemporary times, the internet and other global networks of connectivity? Conceptually, I consider islandness as a process, a configuring of self and identity in relation to and in dialogue with the surrounding islandscapes and socio-political environments. Methodologically, islandness is approached as a subjective embodied experience by zooming in on everyday encounters through a sensorial lens. The experience of everyday islandness embodied by island dwellers and urban island dwellers differ qualitatively, for example, through the notion of pace.

Political slogans and government agendas are built on the concept of “Jazeeraa Raajje” [an Island nation], centered on the symbiotic human relationships with water, mangroves, marine life as well as the built environment. How is the quality of islandness framed within the time-space of and perspective from the Dhivehin, the native Maldivians? And how do such exciting notions of islandness draw on traditional or past ways of everyday life to inform present conditions and imagined island futures?