When my studies became 3D: Learning through objects as a museum intern

After four years of studying social and cultural anthropology at LMU Munich, my internship with Dr. Hilke Thode-Arora, curator of the Oceania department at the Museum Fünf Kontinente in Munich, had been my first time to put feet behind the scenes of a museum and work hands-on with ethnographic objects. Theoretical insight and ethnographic fieldwork during my university courses were thereby supplemented by a new perspective. My studies gained a third dimension, so to speak.

Starting my internship with a small and recently acquired collection of 18 objects purchased by a German traveller to the Baliem Valley in Papua in the early 1980’s, I remember the first glance I had at a Papuan net bag, often referred to as noken.1 It surprised me to find such an object as a new arrival. Too inconspicuous seemed the greyish bag and too little was my experience in museum work yet. Hence, my attention was soon taken up by objects that looked more complex, like a colourful feather ornament, three penis sheaths and a handful of arrows, which I immediately started researching. Finally devoting myself to the bag again, I began to realize that this initially neglected object unfolded a universe much more complex than I would have thought. Focussing my “western” eyes on seemingly more “exotic” objects was an experience evidently shared as well by Karl G. Heider in his research with Dani people in Papua, when he found the complexity he was looking for in penis gourds rather in those bags (1997: 60ff). 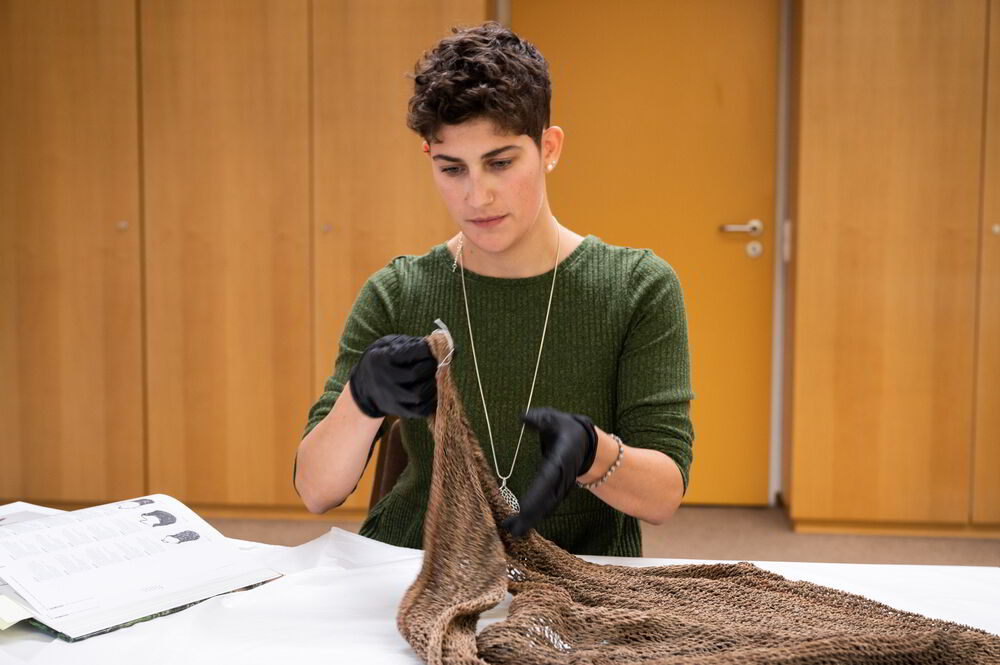 Researching noken at Museum Fünf Kontinente. Photo: Nicolai Kästner /Museum Fünf Kontinente, 2021.Built by one continuous thread of plant fibre, these looped bags were mostly fabricated by women. A band across the forehead allowed them to carry harvest, children and even small pigs on their back. Men and children used bags of lesser size instead. Noken further served as barter, bridal price, protection from ghosts and peace offerings (Koch 1984; Heider 1997; Bräuchler 2015). Turning to another collection at the second half of my internship, I worked on objects gathered by the ethologist Irenäus Eibl-Eibesfeldt during his research in Papua and Papua New Guinea in the second half of the 20th century. Finding similar bags in his collection indicated that noken can be found in other settings too, even if partly differentiated in form, colour, material or referred name. Today, noken also play an important role within the context of Papua’s elections, identity discourses and conflicts concerning the Indonesian state. In 2012, noken became part of UNESCO’s list on intangible cultural heritage (Bräuchler 2015).2

Hence, my initial thoughts on this seemingly inconspicuous object were ceasing to exist. I rather came to the conclusion that not to gather such an object of everyday life would leave out an important segment of the cultural “webs of significance” (Geertz 1973: 5) that Papuans have literally spun and are still spinning. Further, one would also not follow the guidelines of the museum to collect “artefacts of everyday life, ritual objects and works of art (…) to build bridges from the past to the present day and open doors to other ways of life and viewpoints”.3

This one grey bag made me fathom anew the variety of stories connected to museum objects worldwide, and the complexity of current debates about anthropological museums and provenance research. Therefore, next to theoretical training and the valuing of ethnographic fieldwork, I encourage fellow students to also approach objects and their “social life” (Appadurai 2007) for the chance to encounter our field of study and its history in 3D.

Heeschen, V. 2017. Emergence and Transformation: Talking about Origins, Myths, Rituals and Cultural Change among the Eipo and Yalenang in the Central Mountains of West Papua. In: Paideuma: Mitteilungen zur Kulturkunde 63: 89–112.