On 10 July 1895 the Royal Anthropological Museum in Berlin (today Ethnologisches Museum) received a letter from the German colonial politician and traveller Hans Meyer, asking to buy a monumental totem pole that he had seen during his visit of the museum’s storage. The letter caused a stir. The totem pole had been lying in the museum’s atrium for several years, even though the museum did not actually own the object. This started an internal debate, which finally led to the museum’s acquisition of the totem pole in August 1895 from the Trading Company Umlauff for 800 marks. 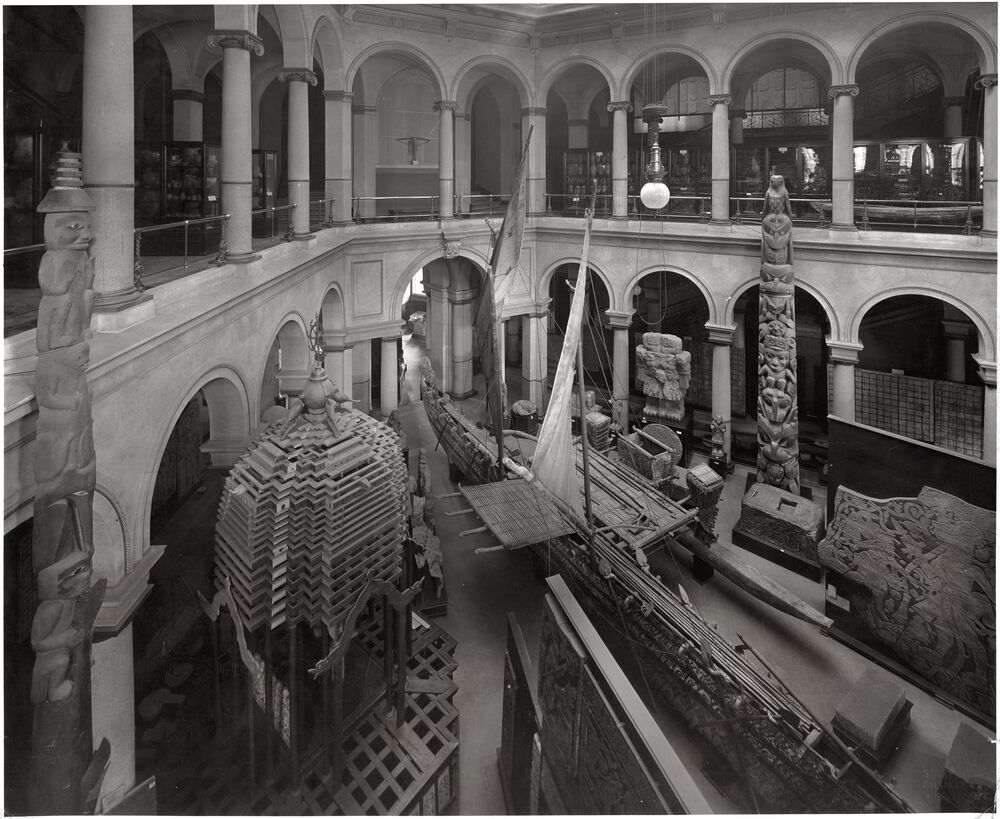 “Tsimshian Totem Pole” in the atrium of the Königliches Museum
für Völkerkunde Berlin, around 1900. Photo: Ethnologisches
Museum – Staatliche Museen zu Berlin, Preußischer Kulturbesitz.This purchase is the starting point of my research on the appropriation, acquisition, and further biography of the so-called “Tsimshian Totem Pole” in the Ethnologisches Museum – Staatliche Museen zu Berlin. Based on the questions posed by ethnological or postcolonial provenance research, I research how the “Tsimshian Totem Pole” was integrated into a complex network of material and social actors and became part of a transcultural history of knowledge and museum practice.

My research shows that the “Tsimshian Totem Pole” was commissioned by Robert Cunningham in Port Essington at the Pacific Northwest coast of British Columbia from local carvers. Cunningham sold the pole to Bernard Fillip Jacobsen, a Norwegian sailor who travelled British Columbia on behalf of Carl Hagenbeck. The German zoo owner Hagenbeck hired Jacobsen to bring a group of Nuxalk people to Germany to exhibit them in a human zoo. Jacobsen was also asked to bring back a collection of Indigenous objects to provide the show with a supposedly authentic scenery. Afterwards these objects would be sold to museums to finance the show.

The desire for totem poles in American and European museums grew at a time when the American Northwest coast was missionized and colonized. At the same time imported diseases killed large parts of the Indigenous population. As a result, totem poles were removed from their original locations in increasing numbers, sometimes against the will or without the knowledge of their owners, and ended up in museum collections. The colonization of the Canadian Northwest Coast made it possible for the objects to be acquired in the first place. Thus, among other things, the Potlatch Ban of 1885, a law passed by the Government of Canada lasting until 1951, made the practice of religion and culture largely punishable.

For Hagenbeck it was important to include a totem pole in his collection as they were the most expensive objects to sell to museums. For Western museums totem poles became colonial objects of desire – or, as David Darling and Douglas Cole put it, totem poles are to ethnological museums what the Tyrannosaurus Rex is to natural history museums, the greatest attraction a museum has to offer (Darling and Cole 1980: 29).

Together with feather hair dresses and tepees, totem poles have become iconic symbols of the global imagination of the Native American. By the beginning of the 20th century at the latest, totem poles became a tourist attraction, transforming the poles into a marketing product for the entire region. The truth is that totem poles are not an example of an authentic Indigenous America. They are much rather a product of cross-cultural exchange between Europeans and Indigenous people and therefore a significant document of the colonial encounter on the American Northwest Coast.

The history of the “Tsimshian Totem Pole” at the Ethnologisches Museum – Staatliche Museen zu Berlin shows how colonial infrastructures – even outside formal territories – were used to expand the collections. Throughout the years totem poles have become part of European history of knowledge and museum practice. This is where my research project begins. Working with historical archives and in collaboration with research and interview partners in Canada and Germany, I am researching the attribution of meaning and value to this pole. I analyse how the “Tsimshian Totem Pole” has created a complex network of material and social actors, thus demonstrating how the object has been and continues to be integrated into different knowledge systems at different points in time.