In 2001, when Rapanui people rediscovered the bilingual treaty by which his island became part of Chilean territory, a profound questioning about the historical ties with the country took place. The bilingual version contradicted the official narrative regarding the cession of sovereignty made by the Rapanui chiefs to the Chilean state in 1888. On the one hand, the treaty made explicit the existence of a native government (Hōnui tavana) who maintained the power (mana) over the territory (kaiŋa). On the other hand, Chile was conceptualized as an ally (hoa) and not as a new sovereign power. From then on, issues related to sovereignty, native governance, and decolonization became part of the local political agenda. However, the institutional implications, local conceptualizations as well as political practices and, expressions related to this historical turn have not been analyzed in depth. Through the notion of hau Māori Rapanui, this is born and being Rapanui, as well as the description of ties that bind them together, this project studies how sovereignty, governance, and decolonization are conceptualized and articulated in constructing the insular future.

Following a historical anthropology approach, four major questions will be explored. First, what are the historicity of the native governance institutions? Second, what memories, practices, and discourses have sustained Rapanui institutions of governance? Third, how have sovereignty and decolonization been understood and performed across space and time?  Fourth, how is a decolonial future imagined? The project sets out to analyze the transformations and entanglements of conceptualizations and practices of Indigenous sovereignty, native governmental institutions, and the discussion and negotiations of both in a multilayered decolonizing process. 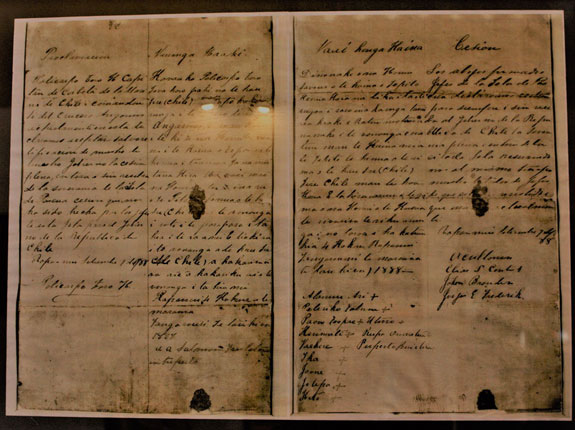 A copy of the bilingual treaty of annexation signed on 9 September 1888, between the Council of Chiefs and the Chilean captain Policarpo Toro. This copy is exhibited in the reception hall of the Municipality of Rapa Nui. Photo: Diego Muñoz, November 2018, Hanga Roa, Rapa Nui.