Since Europeans registered Rapa Nui in their navigation charts, under the name of Easter Island, it has become a place of scientific investigation and ethnographic collecting. During the 19th century, this island also turned into a place of economic exploitation: Many inhabitants were deported to Peru as slave labour, and later transported to Mangareva and Tahiti. At the same time, Rapanui materials, such as the enormous moai as well as the wooden figures and other things, were coveted by American and European collectors and museums.

In the first step of our research project, we will thus analyse how Rapa Nui has become a place of scientific interest and material appropriation. We will do so by paying particular attention to the collections preserved in ethnographic museums in Germany. The reconstruction of the profiles of collectors enables us to understand the complex network of relationships and interests that permitted the circulation of Rapanui materials. During the first half of the 20th century, Rapanui people privileged the range of statues called moai kavakava for the exchange with foreign visitors. In the 21st century, Rapanui artists (re)conceptualize the material entities preserved in museums outside of the island in multiple ways: as relics, ambassadors, or mana-carrying entities.

In the second step of our project, research on these (re)conceptualizations will facilitate access to the contemporary relationship of Rapanui people with their material productions of the past. We are interested in the discourses, practices, and emotions that these collections provoke anew among contemporary Rapanui artists. 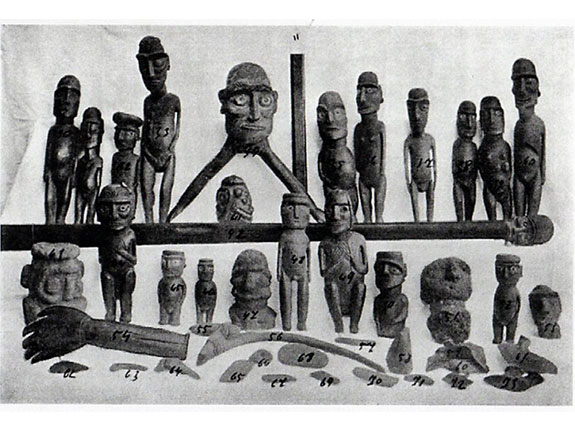 Some pieces collected by Walter Knoche in 1911. Knoche led the "Meteorological mission" organized by the Chilean government and the Universidad de Conception in 1911. In addition to registering information about the climate (winds, rainfall, environmental humidity), he also collected important ethnographic information and objects. Photograph published in Macmillan Brown (1924), "The Riddle of the Pacific." 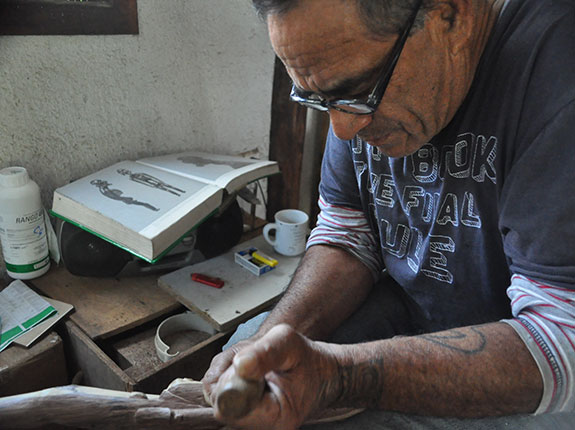 "I received the information from my ancestors through oral stories transmitted by my grandfathers, grandmothers, uncles, aunts, my father, and my mother ... I am a sculptor. I am an heir of the great sculptors of the past." (Bene Tuki Paté, excerpt from "Una vida dedicada a la escultura"). Photo: Paula Rossetti, Rapa Nui.