The Sāmoan multiplicities research project, headed by Dr Safua Akeli Amaama (Museum of New Zealand Te Papa Tongarewa) and Prof. Philipp Schorch (Ludwig-Maximilians-Universität), explores how contemporary Sāmoan identity is spatially and temporally distributed, as well as how and why Sāmoanness remains intact despite past and present ongoing transformations. In this blog post, research assistant Annika Sippel presents an overview of the project so far, and considers some of the avenues in which Te Papa’s own collections can engage with ideas of Sāmoan multiplicities.

I was fortunate enough to join the Sāmoan multiplicities project at the end of last year, and have since embarked on an exciting research journey of probing through archival material, data sets, academic journals, and exhibition lists.

Of course, this also involved familiarizing myself with Te Papa’s rich collections of Sāmoan cultural artefacts, natural history specimens and contemporary artworks. Due to the sheer number, it seemed a daunting task at first, but it revealed so many fascinating and significant narratives that it proved difficult to stop looking for more and more.

Indigeneities in the 21st century

This project is one of numerous other research clusters that have formed under the guiding project Indigeneities in the 21st century, which studies how Indigenous populations have evolved from “vanishing people” to global players. Scholars from various academic disciplines and institutions worldwide are working together to explore this topic from different angles, producing outputs such as short films, online image sharing platforms, book publications, and exhibitions.

For now, the ‘Sāmoan multiplicities’ group has decided to focus on three particular research topics which we will pursue going forward. While they are all connected through overarching themes of language, community and a contemporary Sāmoanness, they also each have their own powerful stories to tell. 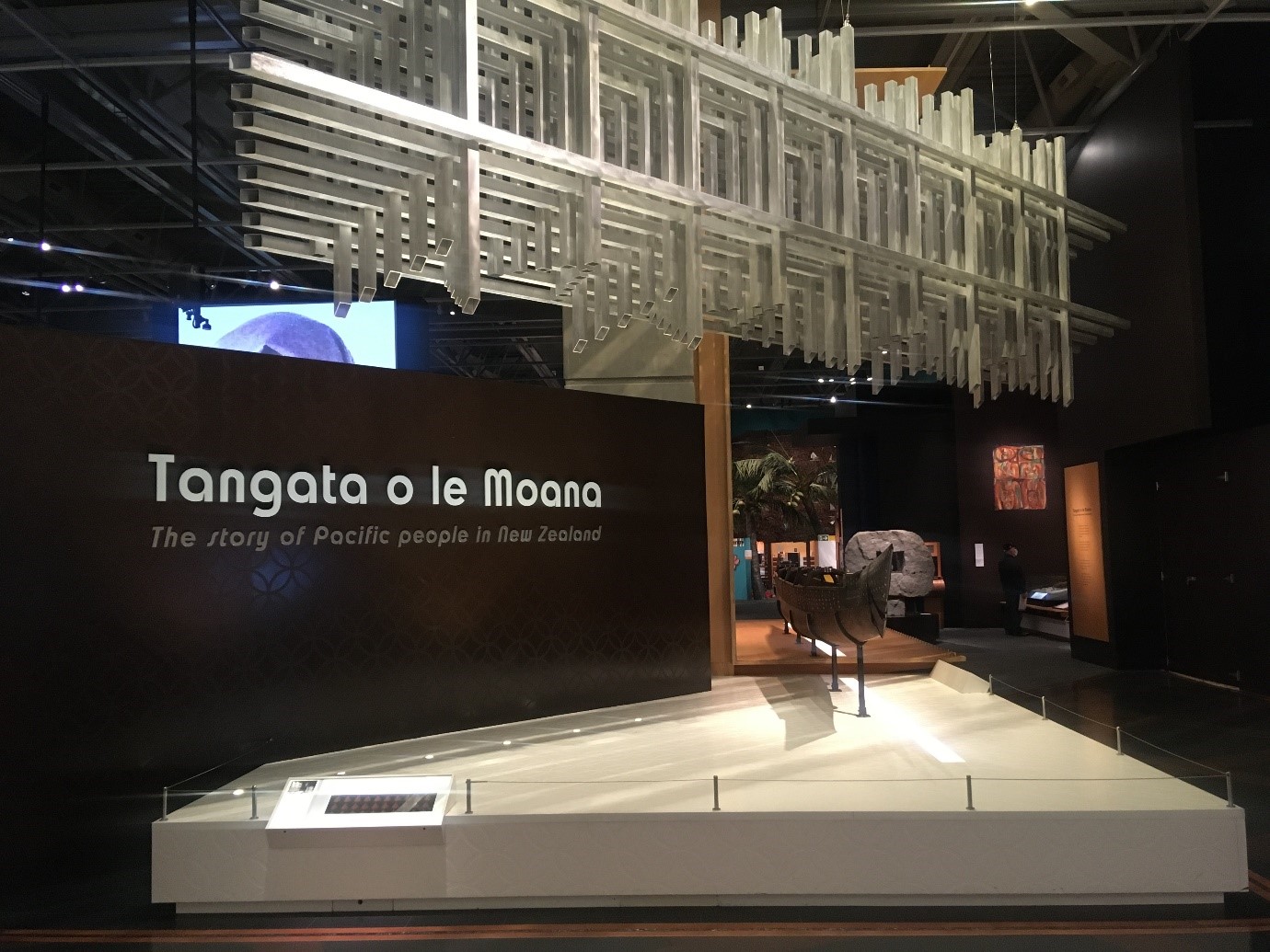 ‘Sāmoa on display: Exhibiting multiple Sāmoas in Aotearoa New Zealand in the 21st century’ is essentially an exhibition history of Sāmoa in New Zealand. Our two countries share an entangled history of colonization and Pacific relations, and Sāmoan artists and cultural artefacts are well represented in  museum and gallery collections. By examining a range of different types of displays, this research explores what kinds of Sāmoan identities have been displayed in institutions over the last two decades, and also how Sāmoan artists, curators and viewers still engage with understandings of aspects of fa’asāmoa, or ‘the Sāmoan way’, today.

The wide range of exhibitions from various cities was surprising, and there were many prominent themes, such as post-colonialism, climate change and gender roles.

At Te Papa, the Tangata o le Moana exhibition, which opened in 2007, presents Sāmoa as part of a broader Pacific identity, while at the same time emphasising what is uniquely Sāmoan. Objects like the 'ie tōga (fine mat) called Le Ageagea o Tumua, which was gifted to Prime Minister Helen Clark in 2002 after her public apology to the Sāmoan people for events that took place during New Zealand's administration of Sāmoa from 1914 to 1962, helped to shape Sāmoa’s current cultural and national identity, both in Sāmoa and in Aotearoa New Zealand. 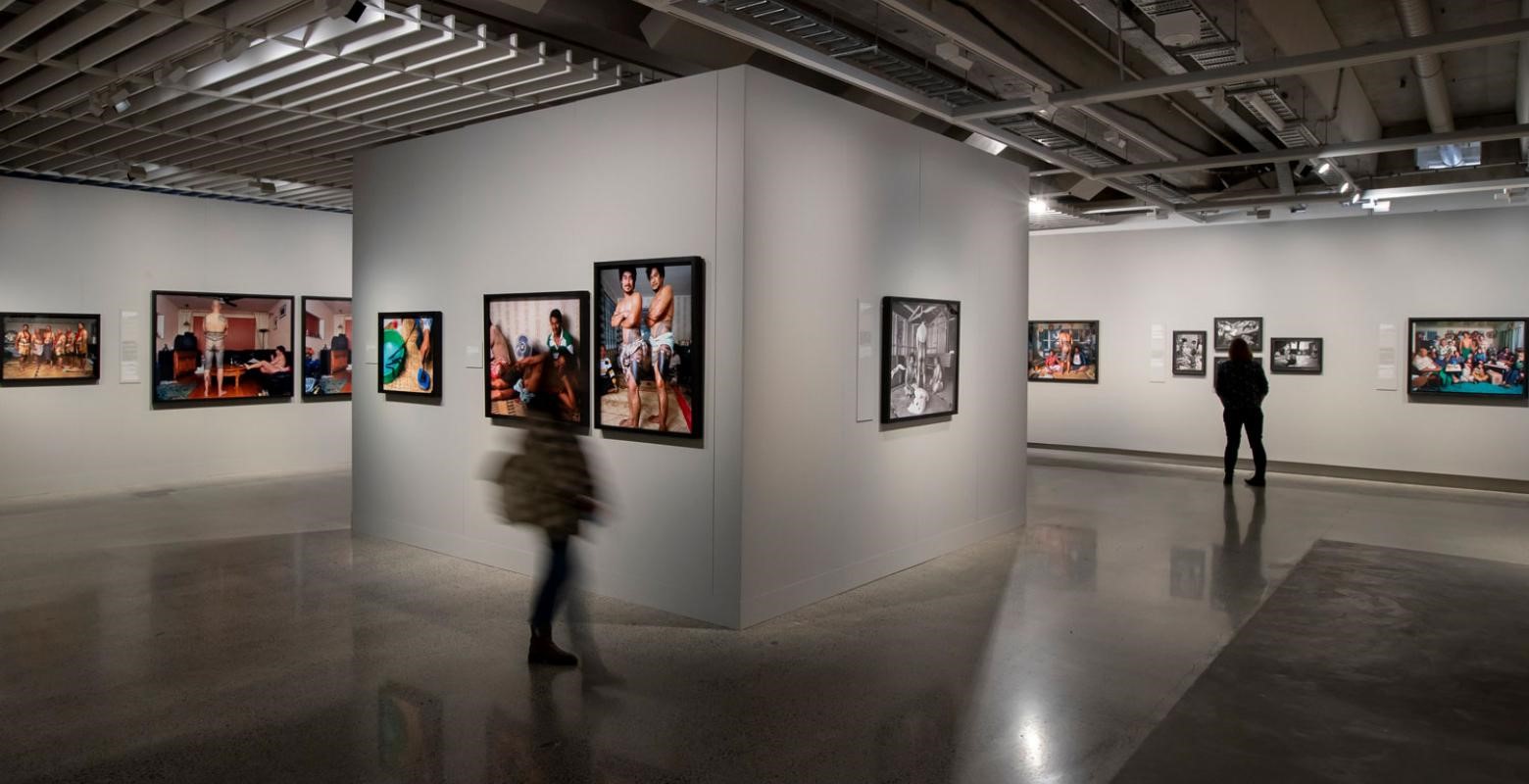 The art exhibition Tatau: Sāmoan tattooing and photography, on the other hand, brought together a multitude of Sāmoan identities, both traditional and contemporary, communal and individual. It was also a milestone for using Sāmoan texts in the wall labels, further acknowledging and including New Zealand’s Sāmoan community.

By treating Te Papa’s collection disciplines as one entity and encouraging collaboration and outreach, we propose that the Sāmoa collections can act as a guide to contemporary sustainability and community practices, as well as environmental changes in Sāmoa and the world. 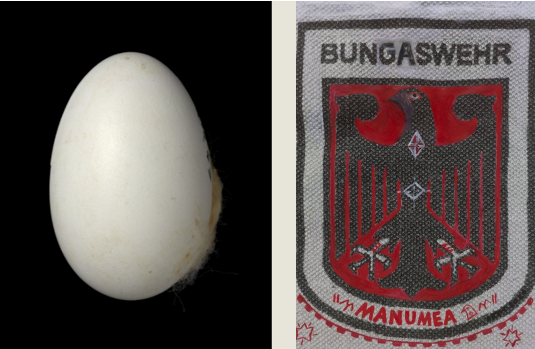 Left: Manumea/tooth-billed pigeon egg, Didunculus strigirostris, collected 1919 in Apia. Right: “Patch: Bungaswehr” by Leafa Wilson. Photos: Te Papa.The first object which stood out for us was this rare manumea egg. Manumea, or tooth-billed pigeon, is the national bird of Sāmoa, the closest living relative of the dodo and itself dangerously close to extinction.

While the protection of this endemic species is a number one priority in Sāmoa today, other objects from Te Papa’s collection speak about how manumea feathers were used by locals as precious objects in the past. A contemporary artwork by Sāmoan-German artist Leafa Wilson also entangles the national significance of the manumea within politically charged colonial discourses.

Another example, a wood sample of a togo or mangrove, helps to inform us about this extremely valuable tree which provides timber and other resources to locals, coastal protection from flooding and erosion, and maintains various marine habitats. Human impacts and more frequent tropical cyclones, however, have resulted in the loss of 30% of the world’s mangroves during the last 30 years.

When looking at examples of Sāmoan siapo in Te Papa’s collection, we also learn about how togo were used to make brown dye, and jewellery made with hibiscus fibre are reminders that other plants like the hibiscus are reliant on togo forests to thrive.

Finally, ‘Sāmoa online: Sāmoan collections, museum digitization, and community collaboration’ analyses Te Papa’s use of digital channels in disseminating their Sāmoan holdings, as well as accessibility and collaboration with Sāmoan communities, and explores the impact of these new digitized items on their users.

Aside from Te Papa’s 'Collections Online', we are also examining our use of online blogs, social media accounts and online journal articles, to study the different ways in which Te Papa presents Sāmoa in digital form. After looking through what is on our website, I also started examining data sets of how this content is accessed by users, what sort of items are popular online, and what users are saying about them.

Major themes that emerged involved discussions around community, genealogy and language, all with a strong focus on a contemporary Sāmoanness. These online conversations by members of the Sāmoan diaspora and academic community are evidence that Sāmoan culture is alive and constantly shifting, while always remaining unique.

Digitisation proved essential in the popularity of objects online, with photographs receiving the most engagement from online users. However, there is one collection item that reigns supreme and has been the most viewed object on ‘Collections Online’ every year since 2016 (except in 2018): O le Tusi fa’alupega o Sāmoa.

This genealogical book, which gathers the oratorical recollection of chiefly titles in written form for the first time, has been digitized in its entirety due to popular demand, and numerous comments left by users indicate that it has been used for ancestral research, preparation for ceremonial practices, and to learn the language. 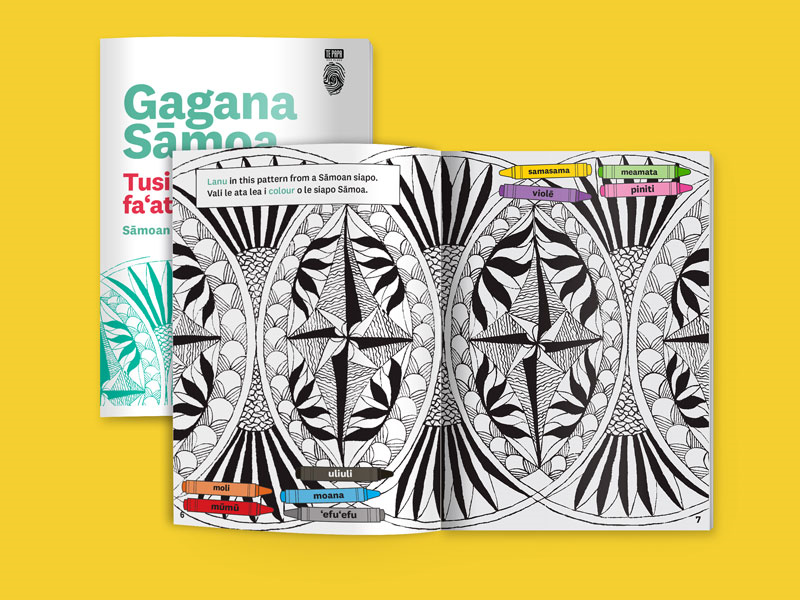 Gagana fa’a Sāmoa or Sāmoan is one of those powerful overarching themes that weaves together all of the research topics listed above. Te Papa has used Gagana fa’a Sāmoa on many occasions, such as the exhibition Tatau (which was, in fact, trilingual!), using Indigenous names for natural history objects like the manumea, publications like the children’s book Going to Te Papa | Asiasiga ‘i le Falemata‘aga i Te Papa, as well as blog posts and other activity sets in celebration of Sāmoan Language Week.

Language plays a significant part in keeping cultures and identities alive, and as the third most widely-spoken language in Aotearoa New Zealand, it is wonderful to think about the impact museums and collections like Te Papa’s can have on its promotion and celebration.