Sāmoan Multiplicities in Sāmoa: Reflections on our field trip

In early November, Togialelei Dr Safua Akeli Amaama, Dr Annika Sippel (both Museum of New Zealand Te Papa Tongarewa), and Professor Philipp Schorch (Ludwig-Maximilians-Universität München) spent a week together in Apia, Sāmoa. There, at the National University of Sāmoa (NUS), they presented a talk on their project Sāmoan Multiplicities: Experiences of Sāmoan-ness. This was followed by a schedule of meetings and visits to various cultural sites and institutions, in hopes of fostering a network to support the continuing research into Sāmoan identities past, present, and future. In this blog post, the team shares some of their highlights from the trip.

Sāmoa puts on a display

Never have we seen so many flags before! While our trip to Sāmoa was first and foremost an opportunity for us to share our work on the ‘Sāmoan Multiplicities’ project with colleagues there and set up a network for future collaborations, it also coincided with two major celebrations that saw the whole country put on a colourful display to a scale we did not expect.

Just moments after Annika’s and Safua’s arrival, driving from Faleolo Airport to Apia, we were greeted by a fanfare of flags and flowers along the road, in people’s gardens and on their houses. These flags, which have been there since the beginning of the year and will remain there until the end of the year, mark Sāmoa’s 60th anniversary of independence from New Zealand. Later that night, more flags appeared, this time dancing on cars, in people’s hands and on their faces, accompanied by the sounds of joyous tooting, singing, laughing, and shouting. These flags celebrated Toa Sāmoa, the Sāmoan rugby league national team, and its milestone achievement of advancing to the World Cup quarterfinals, where they were to win over Tonga in the early hours of the next morning, 6 November.

Given that one of the research topics for our project explores the ways in which museum and art exhibitions have displayed Sāmoa throughout history, it was a wonderful feeling to experience such a powerful, living display of national identity in Sāmoa itself. It really set the scene.

We had come to Sāmoa to put our own work on display, in the form of a seminar presentation introducing our project Sāmoan Multiplicities: Experiences of Sāmoan-ness.

We were hosted by Laumua o Su’esu’ega Tau Sāmoa (Centre for Sāmoan Studies) at NUS, and our talk was well attended by various staff members from the university, other academics, students, ministry representatives, church leaders, and diplomats. It sparked interesting and useful comments and questions from the audience around engaging with local artists, collections, and digitisation projects, paving the way for future engagements.

One such important connection was made by visiting the Falemata'aga o Sāmoa (Museum of Sāmoa). Falling under the Ministry of Education, Sports and Culture, the museum is housed in an old German school building in Malifa, Apia.

Led by Sharon Roma (Principal Museum Officer), the museum team shared insights into how they preserve Sāmoa’s measina (heritage treasures) through their collections, exhibitions, and publications, as well as outreach programs to schools across Sāmoa. This was followed by a tour around the exhibits, which ranged from topics like ‘afa Sāmoa (sennit) to Chinese immigration, in the exhibition The History of Chinese in Samoa curated by Ronna Lee, and the graphic works of Joseph Churchward, which were donated from a 2008-2009 exhibition at Te Papa.

Two of the rooms currently display the exhibition Entangled Islands. This exhibition was first created at Auckland War Memorial Museum in 2014 to commemorate the centenary of World War One, which, for New Zealand, started in Sāmoa. It was a gift to Falemata’aga o Sāmoa in recognition of this shared history.

More of Sāmoa’s complex history was revealed to us by visiting the storage rooms of the National Archives and Records Authority, housed right next to the museum. Fanuaea Amela Silipa (ACEO) led us through rooms with corridors made up of stacked boxes with vast archival material, much of it from the era of German colonization. She also explained that the digitization of this material took 10 years, and digitizing the other archives will still take a long time to complete.

Later that day, we learnt more about ongoing conservation efforts on the Sāmoan islands. 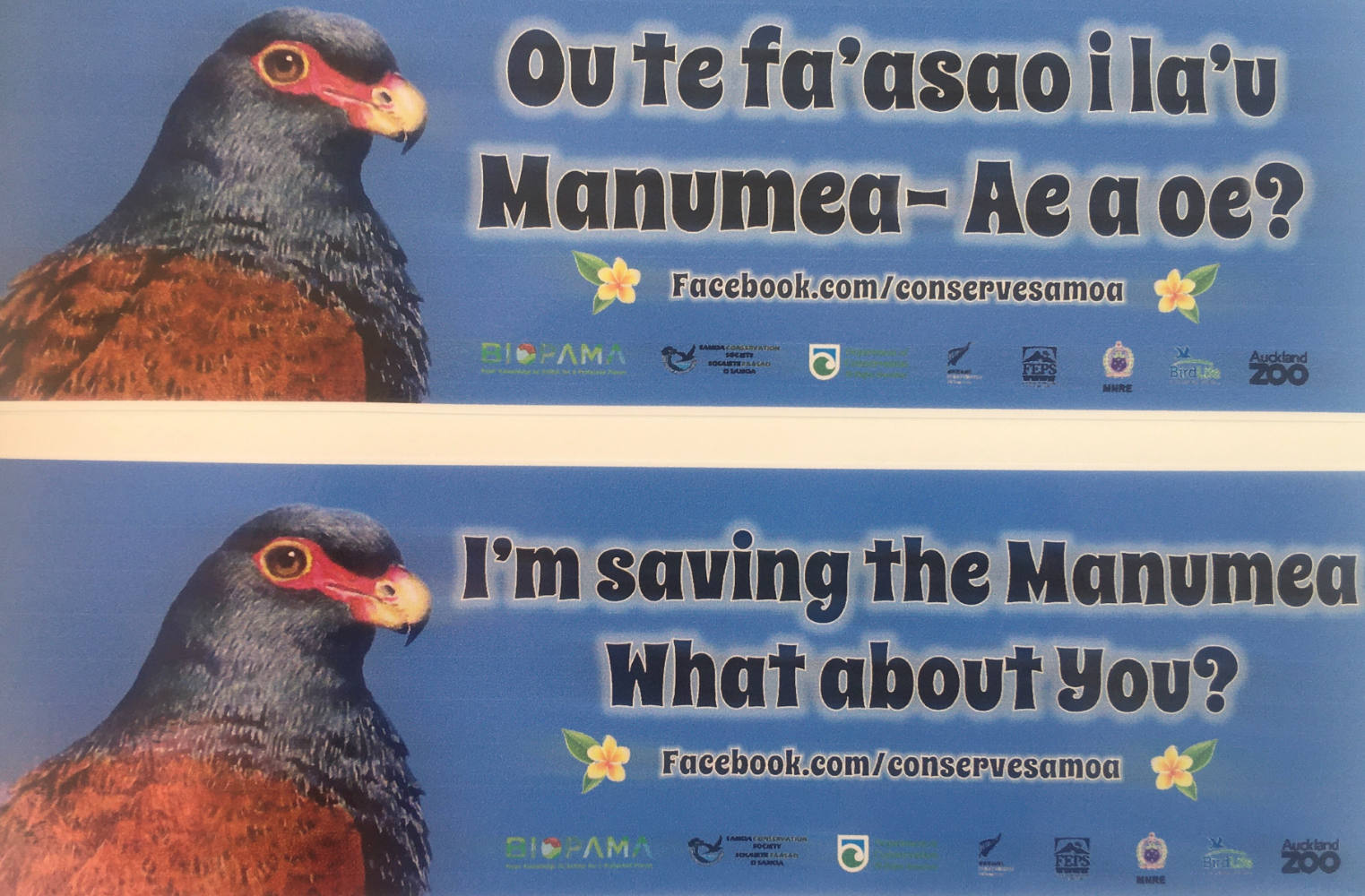 ‘Save the Manumea’ campaign stickers from the Sāmoa Conservation Society. Photo: Annika Sippel.

We met James Atherton, President of the Sāmoa Conservation Society, who told us about the efforts of the ‘Save the Manumea’ campaign to protect and raise awareness of Sāmoa’s national bird, which is both iconic and threatened. The need to reconnect culture and nature resonated with our work on reconfiguring Sāmoan collections across the nature/culture divide, and it was inspiring to see that the Society has pursued initiatives to re-strengthen this connection. We also heard from Aloma Black (Threatened Plant Conservation Coordinator) about the planting and conservation of endangered plant species in the Vailima Botanical Gardens, part of the Vailima National Reserve, which Philipp visited a few weeks later together with a college group from American Sāmoa.

Other places and people we encountered

At this same reserve, we also received a guided tour of the Robert Louis Stevenson Museum, housed in the Scottish author’s Vailima residence where he spent the last years of his life. We then smoothly transitioned from nineteenth-century literature to contemporary visual arts by visiting the Ekalesia Fa’apotopotoga Kerisiano i Samoa (EFKS) Museum and Fine Art School. Lealofi Toleafoa (artist and teacher) showed us around the student displays and gave us a sneak peek at her own paintings – large and colourful versions of Sāmoan stories and legends.

Our senses were further stimulated by the smell and taste of Sāmoan umu (earth oven) cooking at the Sāmoa Culture Centre. Palusami – cooked taro leaves with coconut cream – has been a favourite for all three of us!

We also visited various German monuments around Apia as well as missionary and other memorials on Manono Island, which is only a short boat ride away from Manono Uta wharf, Upolu. There, we saw, for example, the grave of the high chief Tamafaiga, made of 99 stones. As we learnt from our tour guide, Jerry Elisara, Tamafaiga had 99 wives and was killed while trying to escape from Upolu with his 100th wife. The missionary memorial devoted to Faueā Mulipola, the ‘hero of the gospel’, is a significant site, as can be seen from the inscription depicted in the photograph.

There are many more people to meet, places to visit, and archives to comb through. Philipp, who will remain in Sāmoa until the middle of January 2023, has been following up with and expanding on our joint scene setting. Let us see where our collecting research will carry us to.